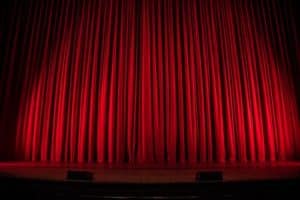 When the Cape Cod Playhouse announces its summer lineup, theater lovers everywhere rejoice. The 2020 season proves to be a rollicking good time, as always, with comedies, musicals, thrillers and more. Located just 20 minutes from the Whalewalk Inn and Spa, seeing a performance at this Cape Cod icon is a “must do” for all our visitors.

The New York Times once referred to the Playhouse as the “Place Where Broadway Goes to Summer”. Throughout its history notable stars of Broadway and Hollywood graced the stage, including Bette Davis, Gregory Peck, Gertrude Lawrence, Lana Turner, Ginger Rogers, Humphrey Bogart, Tallulah Bankhead, Helen Hayes, and Julie Harris. Now, as America’s oldest professional summer theatre, seeing a performance there is one of Cape Cod’s quintessential summer traditions.

In the 1920s, a gentleman by the name of Raymond Moore, having been involved in theatrical productions in Provincetown, envisioned having a theater of his own. He purchased a former 19th century meetinghouse for the sum of $200, moved it to its current location on Route 6A in Dennis, and converted it into a theater. The doors opened for the first time on July 4, 1927 with a production of The Guardsman, starring Basil Rathbone, thus beginning a Cape Cod tradition that has lasted more than 90 years.

In addition to their matinee and evening offerings, the Cape Cod Playhouse also hosts a Children’s Theater series, with everything from magicians to musicals to classic theater as a way of introducing young people to the joy of live theater. It’s a grand outing for locals and visitors alike. Come stay with us at the Whalewalk and treat yourself to an evening at the theater.