Cool jazz returns to Provincetown in one of Cape Cod’s best music events of the summer: the Provincetown Jazz Festival, August 9 and 13, 2018. 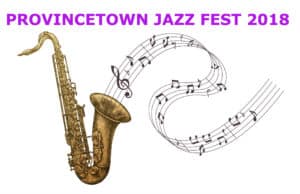 Now in its 14th year, the fest has gained a reputation as a mecca for top jazz talent from across the United States and internationally. This year is no different, featuring notable performers who will be making their festival debut.

The Provincetown Jazz Festival was begun by local musician Bart Weisman in 2005 and every year since, attendance has grown. Now it’s a coveted event for music lovers, and a favorite venue for performers. This year, the concerts will be held in two different locations, one in Provincetown; the other at the Cotuit Center for the Arts.

Cassandre McKinley and Myanna
Thursday, August 9, 2018
7:00 p.m.
The all-female night combines a powerful vocalist and moody sax. Cassandre McKinley, an assistant professor in the Voice Department at Boston’s Berklee College, is known for a voluminous voice, conveying a range of emotions and passion in her singing. Saxaphonist Myanna, who opens the concert, is a top Massachusetts talent who mixes funky rhythms with soulful sounds.
The Crown & Anchor
247 Commercial Street, Provincetown, MA
$30/ticket

Tim Ray Trio and Daryl Sherman
Monday, august 13, 2018
7:30 p.m.
Enjoy a night with two top pianists. Tim Ray was the long-time pianist for Lyle Lovett and has appeared on more than 75 recordings. His trio just released a CD titled “Windows.” Daryl Sherman is a singer-pianist who has been a feature on the New York jazz scene for the past 40’s years.
Cotuit Center for the Arts
4404 Route 28, Cotuit, MA
$30/ticket

The Whalewalk Inn & Spa is conveniently located between the two locations, making it an ideal place to stay for the weekend! Things are starting to get busy, so call soon to make your reservation.