Craft brewer Hog Island Brewery in Orleans, Massachusetts, is proud of their local heritage. So much so, they have it as their slogan, “ Built by locals, brewed by locals, drank by locals.” We may have to disagree—we know plenty of non-locals who enjoy it too!

A paddleboard trip to the uninhabited Hog Island on Little Pleasant Bay in Orleans inspired the company’s name. The beers are the inspiration of Cape Cod native John Kanaga, a passionate brewmaster who, in his spare time, is an attorney for his family’s firm in New Orleans. 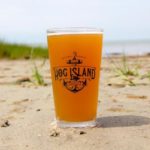 The brewery makes four core beers. The refreshing Outermost IPA is the most popular; others include White Shark Wheat, Moon Snail Pale Ale, and Far Out Stout. In addition to these, Hog Island also brews Amateur Sketch, a double IPA, and a saison-style ale called Pig Pen Pharmhouse.

You’re only about five minutes away from the brewery when you stay with us at
Whalewatch Inn. In fact, come for a visit and you’ll be close to a whole world of wonderful food, entertainment, and activities too!